Although the focal point of the trough - responsible for the weekend’s wild weather - is now well to our south, aimed into Tasmania, the trough still dominates the coastal margin across Southern NSW.

Additionally, a NE thru' E/NE fetch extends out into the northern Tasman Sea, linking up with the supporting ridge below Tropical Cyclone Uesi, which is currently positioned north-west of New Caledonia and tracking south into our swell window.

So, this NE fetch will supply small to moderate mid-range swell for Southern NSW though to be honest there’ll probably be a larger percentage of easing E’ly swell from today, early Tuesday. Expect 4-5ft sets at most exposed spots, easing to 3-4ft during the day and then levelling out around 3ft on Wednesday.

Local conditions look pretty good for the most part, with light variable winds Tuesday morning under the trough, and moderate NE sea breezes after lunch. A shallow southerly change may push up the South Coast on Wednesday afternoon, but at this stage I don’t think it’ll influence Sydney’s surf prospects and we’ll probably see similar conditions with early light winds and afternoon NE breezes (though the nor’easter may kick in a little earlier on Wednesday, compared to Tuesday).

TC Uesi is an interesting weather system, as it’s been a part of our long range guidance for more than a week now. And the models have been unusually convergent on the broader path, which doesn’t happen at long lead times (especially when there’s another dynamic system within close synoptic proximity).

Prior to then, we’ll see leading edge forerunners arriving on Thursday, with peak swell periods around 13 seconds. I don’t think there’ll be much size in this initial energy though, and the background mid-range E/NE swell (discussed above) will probably do a better job at maintaining 3ft sets across open beaches. Morning winds look like they’ll be light but the afternoon may see freshening E/NE winds as the cyclone starts to approach our region.

TC Uesi will properly enter our swell window later Wednesday and into Thursday, and therefore Friday is where we’ll start to see a step-ladder increase in size from the NE. Initial 3-4ft sets should build to 6ft+ by the afternoon, and we are a risk of a developing easterly breeze but for now it looks like TC Uesi (by this time, an ex-tropical cyclone) will remain far enough off the coast to allow for light to moderate wind strengths.

However confidence in the exact timing of Friday’s swell increase - and the local winds - is not yet concrete, so we’ll have a closer look on Wednesday.

There’s a couple of things I really like about TC Uesi, but a few things I don’t.

The positives are a steady forward track towards the coast (rather than away), a healthy supporting ridge to the south-east, maintaining a broad fetch on the southern flank of the cyclone, and a path near the coast - to maximise size potential - but not right on the coast (that might destroy the swell lines with unnecessary short range energy).

However, TC Uesi’s forward speed is a tad faster than ideal (and may slightly inhibit a captured fetch scenario), and the fetch length of the core winds is not very long. So when estimating surf size, we have to be careful not to assess the broader system by cherry-picking the stronger characteristics of the inner parts of the cyclone, and then applying this across the entire system.

In any case, Saturday looks like it’ll deliver a peak in size from (ex) TC Uesi. We’ll see a broadening swell direction as the NE energy is complemented by new, stronger E’ly swell trains, and whilst the background energy should deliver surf size in the 5-6ft range from Friday afternoon thru’ Sunday morning, we’ll see a brief peak of larger waves pushing 8-10ft.

This main peak in size is expected across Hunter thru’ Sydney coasts on Saturday morning (lasting perhaps a half-day or so), and the peak will then push towards the Illawarra coast into the afternoon and then the South Coast overnight. We’ll see a rapid easing of size into Sunday though early morning should retain the background swell at 5-6ft, before wave heights ease further during the day to around 4ft.

Also in the mix on Sunday will be a short range S’ly swell from the western flank of ex-TC Uesi as it passes to our south, though sets won’t be much more than about 3ft from this source.

Local winds look pretty good at this stage. Actual strength will depend on just how closer ex-TC Uesi pushes to the coast, but I’m expecting freshening E’ly winds across a small region (around Sydney and the Hunter) to swing S’ly in the morning then SW during the day. The same pattern will probably eventuate further south, though with a time delay.

Sunday looks to see light winds in most areas as ex-TC Uesi pushes into the central/lower Tasman Sea. Some regions (mainly south of Sydney) may see a lingering S/SW flow but I don’t think it’ll be an issue.

A brief reintensification of ex-TC Uesi in the southern Tasman Sea later this weekend may give rise to a short lived but punchy SE swell early next week, but this is still quite some time off.

Otherwise, persistent moderate trades south of Fiji this week will maintain background E/NE swells in the 2ft to maybe 2-3ft range for most of next week (probably larger towards the end of the week as the trades muscle up).

This strengthening of the trade flow will be related to another tropical cyclone that’s expected to develop north of Fiji later this week, and will probably slide between it and Samoa early next week, and so we’ve got some more long range E/NE groundswell potential into the long, long term outlook.

Either way, no shortage of waves for the East Coast. Been a dynamic summer, eh?

What an exciting time to be a surf forecaster!

Just out of curiosity, what speed would a system move to create a perfect captured fetch? This could get complicated. Do different swells move at different speeds?

Billie
Did you score good waves over weekend?

I forced a surf yesterday. I paddled out at Shelley but the wind was to strong for me to make the lineup. I ended up just hetting a beachie wave in and then re-paddled out midway between shelley and South Manly after each wave. Did 9 laps

Good on you Billy

Captured Fetch is a travelling fetch that moves at the same speed and in the same direction as the swell being generated. The speed of travel of a deep water swell group of waves will be 1.5 times the swell period; ie: a 20 second period swell will be traveling at 30 knots. The actual individual waves in that swell group however will be traveling at three times the swell period, so a 20 second period swell will have individual waves moving at up to 60 Knots in that swell group.

But my take on all of the above is that for the example above you’d need the fetch moving at the same speed as the swell group (ie 30 knots).

But I’m sure Ben and Craig will be more knowledgeable in this department.

Hey Ben - did the SEQ/Northern NSW forecasts get mixed with Sydney, Hunter and Illawarra??

Only the mailout, sorry. Being corrected now.

If you hit the WAMS tab on this page you get the North Shore.

That's relative to the page you were on before. If you want the southern NSW WAMs, select a southern NSW spot and then click WAMs :)

Haha thanks Craig, I knew there was a simple explanation ;)

Everything geared up, got the aok from work to have some flexibility in my hours aaaaaand get the news I need to fly OS for a funeral.
Catch a few bombs for me crew.

He who hesitates is lost

Carparks are full this morning.

It comes after yesterday's surprise lack of wind, which might have caught the crowds on the hop. Had three surfs, and even late evening when the surface had settled and the point really switched on there was maybe 10-15 people out spread the length of the reef.

Today, there was that many out at 6am.

Still light now and should be OK into the early arvo.

Interupting this transmission with a weather and surf forecast for Donegal, Ireland, where tomorrow they're expecting 40ft surf and snow. 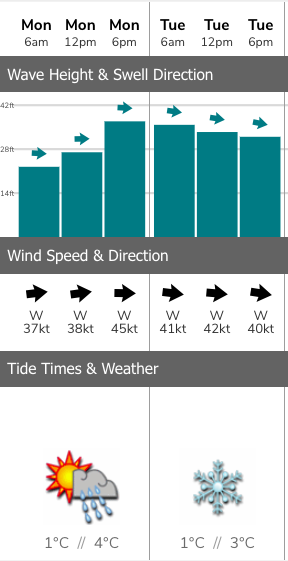 Craig would still find a window of clean fun surf

Morocco is going to have the swell of the century this week Stu, like 21 sec periods. My fomo level is like critical maximum, I cant sleep.

While you're mindsurfing Morocco I'm seeing Jardim do Mar 10-15ft and offshore for days.

Before being caught inside and dying on the rocks!

I thought they ruined Jardim with a breakwall Stu? Stoked if my intell is wrong..

Bit of backwash when it's smaller and breaks closer in, but no negative effect on bigger swells.

I just remembered something I did a few weeks ago with my kids. Dropped a stone into a puddle and watched the ripples. When the stone hit the ripples were higher and closer together, as they radiated outwards they spread further apart, became lower and SPED UP! So bizzare. Helps me understand why ground swell are faster.

Not sure where the crowds were mid-morning at Manly, real fun high tide wedge bowls.

Never is a problem ;p

Just did the drive around from one end of the coast to the other. Pretty much every beach has been eroded, but the degree of it differs wildly, some beaches, including my local have been scoured out back to the vegetation while others simply have a small berm near the high tide mark.

Now the swell is settling I got a glimpse of where the sand has been deposited. Lot of breaking waves were jumpy and irregular, I assume from the sand underneath being driven into place by storm surf, but given a few smaller swells to smooth the dramatic contours there's a lot of potential around.

Good to see the coast looking so different, but that the sand has remained within the embayments is great news for the coming season.

Where’s the new notes? Ya taking a while

Covid-19, Swellnet, and the way forward

To say that we’re in at time of unprecedented upheaval seems kinda irrelevant now.

The quarantine of the Ticonderoga: The 'hell ship'

A short, topical, and somewhat brutal slice of Australian history.

This year, change has been foisted on the world, but surfing - when we all return - is still in our hands.

The Wozzle has taken the difficult but courageous decision to crown this year's top dogs.

An independent surf film that's tailor-made for these times.

Watch: Griffin Colapinto // Why Not?

He's one of the surfing world's greatest all-rounders, Tudor's skill is appreciated by riders of all kinds of craft.

Lockdown with a look back at The Surfer's Journal doco on Larry Bertlemann, arguably the most influential surfer of the modern era.

Watch: So what about John John?

If not for the Covid fever dream, the Corona Open would've started today. How might John's knee have held up?

"When it happens it's like the greatest feeling in the world."

In news that surprises no-one, overnight the IOC has officially postponed the Tokyo Olympics.

A plea from an Australian living under coronavirus lockdown

The scenes of Australians living life as usual on packed beaches has one Australian expat living under Spanish coronavirus lockdown in despair.