Large E'ly swells on the way, holding for quite some time

Best Days: Most days will have plenty of waves for the points; biggest late Sun/Mon/Tues (maybe too big for many spots).

Recap: There's been plenty of surf across all coasts, with building SE swells throughout Far Northern NSW and SE Qld offering 3ft sets across the outer points, and a long period southerly swell building through Tuesday south of the border, reaching 4-5ft at south swell magnets, easing slowly today. Winds have been problematic at exposed coasts and Tuesday saw periods of easterlies, but we’ve seen a broader spread of offshores in Northern NSW today and S’ly winds throughout SE Qld with ideal conditions at protected spots. Chunky mix of Wednesday swells on the Tweed Coast

Today’s Forecaster Notes are brought to you by Rip Curl

Looks like more of the same for the next few days. Except the southerly swell is on the way out so expect easing size from this direction throughout Northern NSW.

Elsewhere, a broad, stationary ridge through the Coral Sea will maintain mid range SE swells for most of SE Qld and Far Northern NSW (with smaller surf as you head south from Yamba). We’ll se a continuation of 2-3ft+ sets of variable quality across the outer points, with larger but more wind affected waves at exposed beaches, such as the northern ends of the Gold and Sunshine Coasts, and most open stretches of the Tweed, Byron and Ballina coasts.

Winds will generally remain moderate to fresh SE (even E/SE across some regions, mainly the Sunshine Coast), though we’ll see a little lighter strength across the Mid North Coast. And there’s a reasonable chance for pockets of offshore winds - not just early morning, but also associated with passing showery cells. So there'll be lumpy, chunky beachbreaks from time to time if you're prepared to sniff out a window of opportunity.

All in all, it just looks like a fun summer trade swell, but with five extra degrees of wind chill!

There's no change to the weekend outlook at this stage.

The ridge will weaken into Saturday, though we’ll still be at risk of onshore E/SE thru’ SE winds on Saturday. But the trend will be improving quickly and by Sunday we should be back to a light variable airstream.

Wave heights will also build over the weekend, from a broadening, strengthening easterly fetch in the northern Tasman Sea later this week in conjunction with a significant low pressure system developing between New Caledonia and Fiji.

Whilst we’re not expecting a peak from this event until Monday, the early stages of this synoptic cycle will kick up a fun mid-range E’ly swell Saturday and early Sunday with 4-5ft sets at open beaches, and smaller waves at protected spots.

The leading edge of the main swell is expected to reach the coast on Sunday afternoon, though we need to bear in mind that last light is a lot earlier this time of the year, so a session pegged for “the last few hours of the day” means we need to see some activity by 3pm or thereabouts. Had this situation been positioned in late December, then the chances of a solid late session from the new swell would be higher.

Anyway, despite expecting a peak on Monday, there’s a good chance that exposed locations will push north of 6ft+ mid-late Sunday afternoon, and with light variable morning winds tending S’ly by this time, we should be in a good position for some impressive options at those locations that can handle a large, powerful east swell (sand permitting).

There’s a lot to get excited about with this tropical low - it’ll be broad, very strong, slow moving, and aimed in a really nice part of our swell window for quite a while.

A new ridge is expected to build across the region on Monday, freshening SW tending S’ly then S/SE winds through the day so the points will offer the cleanest surf. At this stage I’m still pushing above model guidance (5-6ft) and expecting solid 8ft+ surf at exposed locations (smaller running down the points, and at sheltered locations), easing a little into Tuesday.

However, to be honest - this swell will probably overpower most coasts so you'll probably have to do a lot of searching for anywhere handling the size. Large E'ly groundswells like this are not common, and many locations that can handle the size are suffering from unusual sand distributions. So, keep your expectations in check.

The ridge looks like it may not be very strong, and only short lived, so light winds are on the cards for Tuesday. Size should be down a foot or two from Monday (6ft+ open beaches early, easing later, smaller at sheltered spots).

The models have shifted the long term position of this tropical system a little since Monday’s outlook, but it’s still going to remain a very good spot: slightly further east, and stationary, probably until the middle of the week at least. This should fluctuate wave heights in the 4-5ft, maybe 4-6ft range from Wednesday through Friday, easing a little into the weekend but likely to remain somewhere in the inconsistent 3ft+ range.

The only other swell source is a short-lived, poorly aligned (though very powerful) low south of Tasmania on Sunday that may deliver some small S’ly swell to Northern NSW on Monday and Tuesday. It’ll be hard to spot beneath the E/NE groundswell though.

Wednesday is at risk for a developing S’ly airstream across most areas as a front pushes into the Tasman Sea and forms a low towards New Zealand; we may also pick up a short range S’ly swell from this pattern (late Wed/Thurs) but let’s take a closer look on Friday.

That’s what I was thinking. Unusual system for mid-winter

Distracting viewing on Multicam this morning. Crazy amounts of rain the last few days after a dry Summer.

Nice to see the trade swell showing at Agnes Water. Readying my ski-hate posts in preparation...

Checked from Burleigh to dbah today. Was super super shit.
Don't waste your time on the cams.

Surf muscled up here this afternoon and the wind backed right off.

But instead of one of best pointbreaks starting to clear it's throat it was like 3 closed out beachies joined up. No lineup, no shape.

I'm putting a photo of one of the local points, unnamed but people will know where it is, not to BS or promote but to show what people in a froth about a super hyped up swell will be dealing with.
No bank, no shape, no lineup.

No doubt the Ballina bullshitt report will be claiming 7 or 8 out of 10 and "head to the Points, or protected bays".

Well, this is what you will find, except instead of being 3ft it'll be 6ft or bigger. 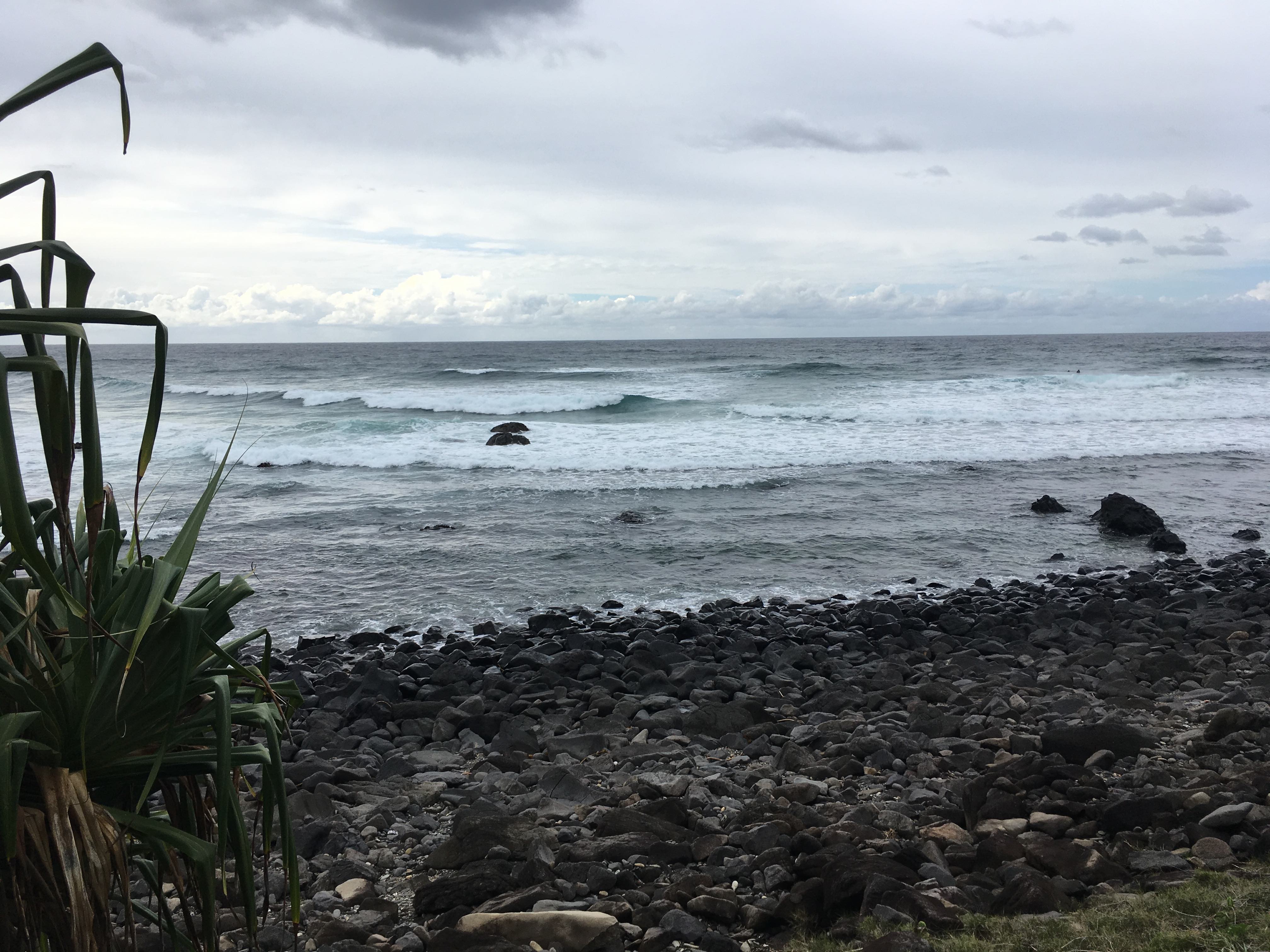 funny you should say that, I watched guys going left at the Point this arvo.

man, it's a disgrace.

Spent a little time in the shed this arvo, sorting boards, sorting fins, legropes, wax etc, then I hopped in the chariot and drove a few kms north and south scoping the coast. The places that need sand look the goods, while the rock breaks just sat there dumb and empty and I silently chuckled to myself, "Next week, motherfuckers."

Some time after that i went in there with a guy from WA i cant remember his name. that guy caught maybe 5 waves he struggled a bit with it. he said it was a bit tricky but he had fun and thanked me for taking him in. He said to me he had surfed waves that heavy before. He asked me do you know anyone in WA At that time the only person i surfed with from WA was keith spencer from gracetown i remember keith ripping his ear off at desert point going into town getting it stiched back on and back the next day.
Somehow I lost the first 2 parts of this post you didn't get them sorry it doesn't make sense i will re submit the whole story for you tommorow

One guy out Craig!

Nothing like that Splendour day you scored last year.

Mmm, looks like that was one of the better weekends of the past year! Which is sad.

definitely one of the days of the winter last year.
And we haven't had anything even remotely as good as that since Oct last year.

Far out Steve, over a year of that gurgle by the sounds of it. Wonder if house prices will start to fall soon ;)

You wouldn’t have these problems if you were a bunch of landlubbers like my good self.

yeah fuck this coast, sick of closeouts: I'm going on a road trip to Agnes.

pack the mal, it's slower than it looks. And a helmet, the surf school will be out in force 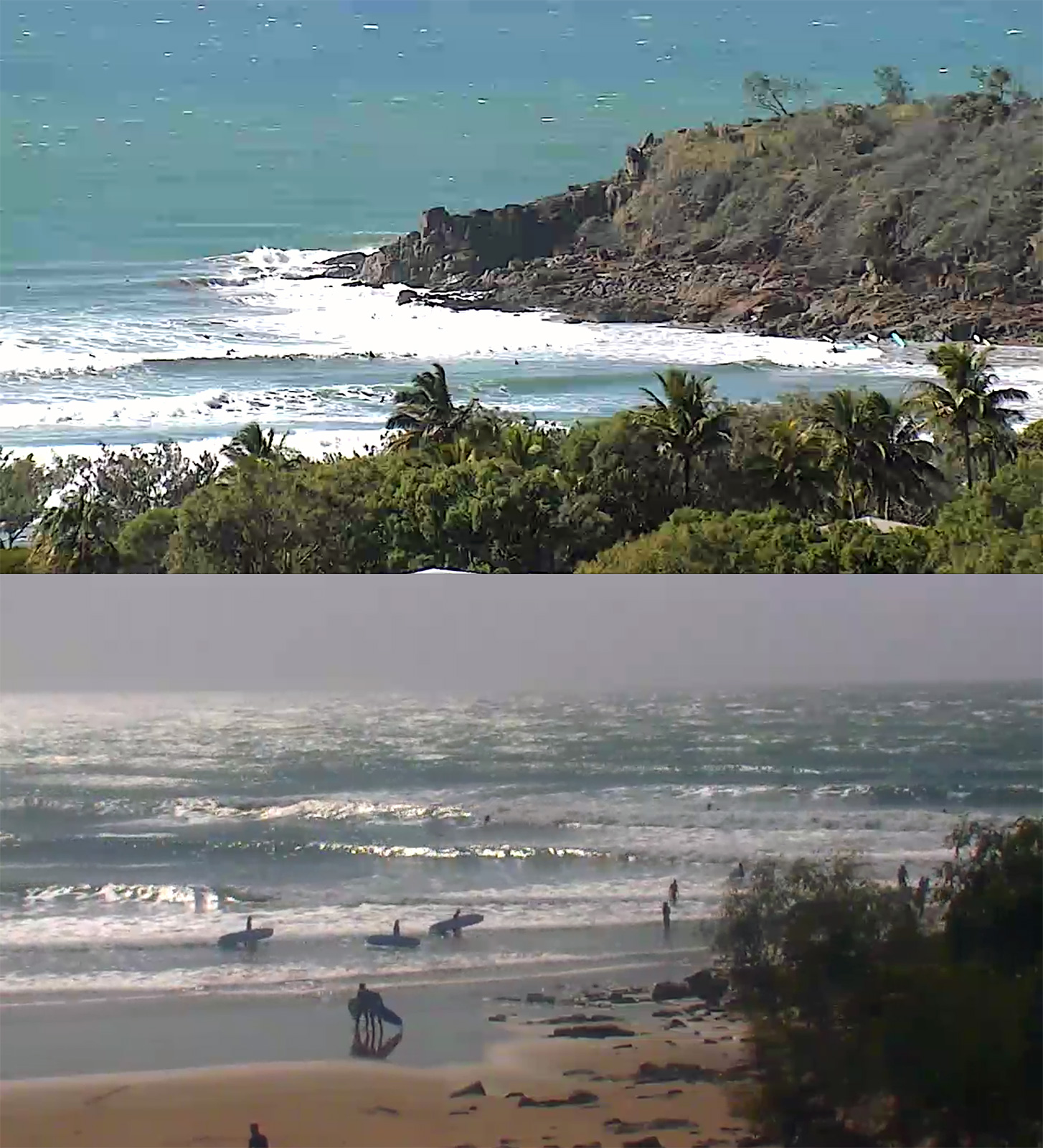 Agnes has such a Caba look to it

Finally a bit of discoloured water thanks to the recent rains.

Swell is straight East and wonky. I suppose it could be good somewhere, doesn’t look like anything too amazing currently.

It's pretty much as perfect as it gets, synoptic setup wise, for the whole East Coast to be bathed in large and persistent easterly swell energy with fronts bringing offshore winds. Some spots won't handle the size but other than that, it's an amazing week of waves to come.

The new cloth on the block

It's cheaper, it's stronger, and it's more environmentally friendly, but will basalt cloth replace fibreglass as our preferred reinforcement for surfboards?

About those things on Carissa Moore's board...

Two of the heaviest hitters in the game have a secret under the hood.

Incoming from the east

Just as the East Coast was settling into winter and a belated pattern of south swells, the Coral Sea has begun to twitch and tremble.

Board advice for the bog standard surfer!

Trainspotting through the old continent.

The entrees are served before the feast arrives, with Occ, Mick, and Asher hooking in.

A gluttonous feast for hollow-minded kings!

Surfing gets one step closer to permanent Olympic inclusion

Surfing, along with breakdancing, is poised for permanent inclusion on the Olympic calendar!

Toledo backs up his Rio Pro title, while Sal makes a break in the Women's

The ratings leader aggravates his knee injury with J'Bay just two weeks away.