Following the oversized action at the Tahiti Pro trials, the first day of the Tahiti Pro waiting period dawned with a small, listless mix of swells. It was called a lay day, and tomorrow will be the same.

The coming few days will provide a bit more size, but the quality and direction of the swell won't be crash hot. The organisers will at least be able to cross off the early rounds if they wish.

An inconsistent mid-period S/SW swell is expected to build through Friday afternoon (local time, Saturday in Australia) and peak on Saturday, but size wise we're only looking at sets to 3-4ft later Friday, easing from a similar size on Saturday.

Cross-shore SE winds will create average conditions as the swell kicks Friday. The wind will be a little better in Saturday as it edges to the E/SE.

A small mid-latitude low that's currently formed (and stalled) south of Tahiti will produce a weaker S'ly swell for Sunday, though again we're only looking at sets around 4ft. Conditions, however, will be great with E/NE trades and they'll remain that through Monday as the swell drops from a small 2-3ft.

Next Tuesday and Wednesday is when the first significant swell of the waiting period hits.

As touched on in the early forecast, a strong node of the Long Wave Trough will move across New Zealand and stall there, which isn't ideal. This puts New Zealand right in the way of incoming swells, effectively cutting them in half. 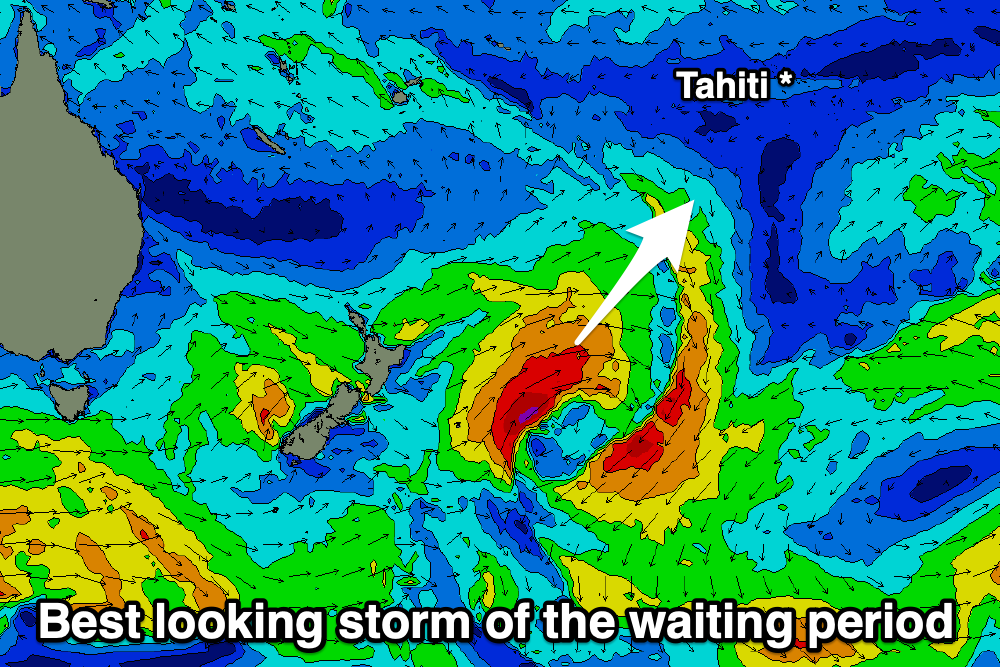 We are expecting to see a strong front pushing over the top of New Zealand and then forming back into a low in Tahiti's swell window (see image above), aiming a fetch of gale-force S/SW-SW winds towards the islands.

A strong S/SW groundswell should be seen, building to the 6ft range through Tuesday afternoon with occasional 8ft bombs. The swell will ease from 5-6ft on Wednesday morning.

Surface conditions are looking great with persistent E-E/NE trades swinging more N/NE as the swell fades further Thursday form the 4ft range. There'll also likely be some very inconsistent W'ly swell in the mix from later Monday through Tuesday from the strong frontal activity in the Tasman Sea, but it'll slip under the primary swell.

Moving into the back half of the waiting period and there's no further significant swells due, with mid-period energy padding out the window. There is, however, a large swell forecast to hit just after the waiting period though it's a long way out and certainty is low.

We'll keep an eye on developments and provide any changes to this in the comments below.

Craig is NZ the culprit with the islands in the pacific? Looking at the Indian Ocean there always seems to be swell around yet once we move around to the pacific it dies in the bum big time. Same Southern Ocean source however nowhere near the same consistency compared with Indonesia.

No, there'd be other factors to why the southern Indian Ocean gets soo much more storm activity compared to the South Pacific. Not sure what they are though.

More so Australia in the way I’d say.
Indo further from the storms. More time to iron out any wonk. =perfection.

Not sure there is more storm activity.

Chile, I wager, would have far more consistent and bigger surf than Indo.

Yes but its much colder and winds are not as consistent.

Yeah it gets slammed over there.
Turns onshore/ cross shore at 9 am all season though.....

@Craig Brokensha Cheers for the updated report mate, its helped me to readjust my fantasy team, might help me beat the rest of the lads in my group hah. I would love to track the long wave trough, is there a link you could provide as i can't find allot of info online about it.

At least we can count on lemore for two foot waves , Super consistent also LOL!

WSL presser: "With 15ft seas pointed directly at Tahiti, Tuesday is forecast to be biggest day at Teahupo’o for a Championship Tour competition since 2014. "

Yeah swell is due Tuesday their time, which is our 4am tomorrow.

Will this swell last long enough for them to finish?

What about this coming Sunday? Models look to be counting a few swell trains but will they wait for then for the finals?

That was partially what I was getting at. Automated model has SE winds for Sunday but.

Yeah that mid-latitude low is forecast to generate a large close-range S/SW groundswell, but winds are a little dicey at this stage.

they can finish in two days can't they?

They can. They’ve got 23 hours of daylight, and 18 hours of heats

Today should have been a competition with the best surfers of the world- instead, just like the day at the box and every year at pipe, we had many heats with guys not even willing to take off (and still getting paid)- the system that has allowed surfers that are nowhere best in the world competing needs to be addressed

so many barrels my head is spinning,would have to be one of the best days of competition ever.....full on gladiator pit and the cream is rising to the top.......the boys are charging in friggin scarey waves,certainly earning their mular......the boats are a worry and certainly throw another element of danger into the mix on low tide.Bring on tomoz.

Starting replay now, 9 mins in, I just had to speak up.

The most impressive start to a day I have ever seen.

Those aerial panning views and Andre getting a hair cut.

What a place to be smiling in.

Sorry I meant 4 mins in.

The surfers are so amped after being spat out the barrel. I recon they could throw in a big hack for an extra half a point or so. Finish it.

The surfers are so amped after being spat out the barrel. I recon they could throw in a big hack for an extra half a point or so. Finish it.

“The release of contaminated water direct to the ocean is the optimum solution."

Half-complete but full of promise.

Swellnet speaks to a longtime visitor about the controversial new pathway at Lagundri Bay.

The basalt board project - Part 1

Made from rock, the latest cloth on the block passes the first test.

Nat Young speaks about the Church of the Open Sky

Nat chats and that's that! On the eve of his book release, Nat Young chats about Midget, his good mate Miki, and why we have to look after our history.

More time in the surf is less time in front of the screens.

“That was a nice heat,” said Gabriel Medina, "it felt so good to get a nine and a ten."

And it's great news for the Great Barrier Reef.

Watch: The fight for the Bight in Norway

From Streaky Bay to Oslo and onwards to the Lofoten Islands, Heath Joske is taking the fight to Equinor's home turf.