Autumn 2019 on the East Coast was a particularly poor season. We made that argument in an article last month, but howsabout another layer of data just to put the case beyond doubt?

If you recall, we looked at looked at the monthly wind and pressure anomalies (the difference from the long-term climatological mean) for March and April and it confirmed what most East Coast surfers had been thinking. This autumn was poor with persistent onshore winds and small swells, while on the other hand Victoria and South Australia had a great run with good persistent swells and favourable winds.

Well, we've just got the data back from May and it reinforces the data from March and April.

Across the entire Tasman Sea we've seen winds generally from the north to north-west, not conducive to swell production at all, while a positive westerly wind anomaly can be seen in the Bight and across Victoria, relating to their consistent run of clean fun surf. 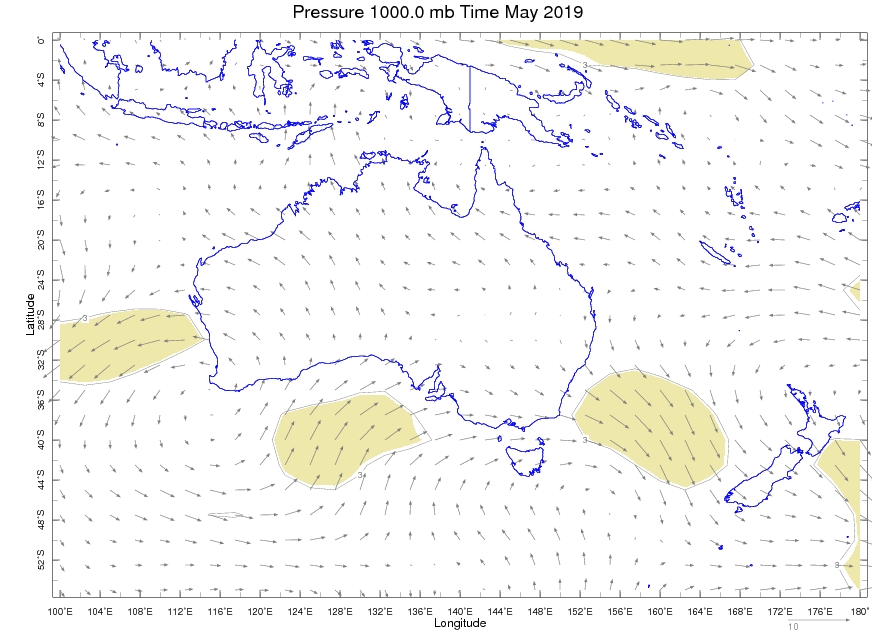 What we can take from this is that is that the unusual weather wasn't a month-long anomaly, but it enveloped the whole season. The pattern bedded down across the continent for the better part of a quarter of a year. 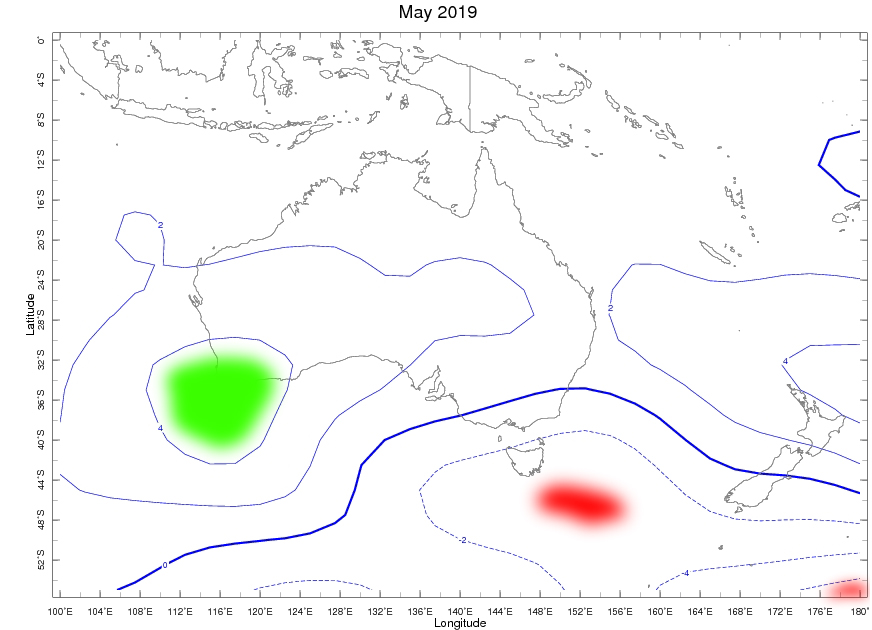 So now we've explained away the past autumn, what's in store for the coming winter?

Unfortunately, there are too many influences on our surf climate to nail down a specific trend ranging from what the Southern Annular Mode (SAM) is doing, where the Long Wave Trough is focussed, whether we're in El Nino or La Nina, and also granular details such as regional water temperatures.

For the East Coast there have been studies conducted showing the cause and effect on sea heights in the Coral and Tasman Seas in relation to El Nino and La Nina. During La Nina we see an increased in swell activity, while during El Nino we see the opposite.

We're currently on El Nino watch which means we're not quite at the threshold for a proper El Nino event and even if it does reach it, it will be weak and short-lived. This doesn't bring us any closer to an outlook for the coming winter on the East Coast. It's currently pumping across selected spots, but this is owing to the Long Wave Trough moving through.

For the other states it's even more flukey to make a prediction. The SAM influences how far north or south the storm track is: when it's negative it's pushed further north over the country, and when positive, further south and away.

It's currently weak positive and is forecast to remain so for the coming fortnight or so, which is why we're currently seeing a small run of surf. Forecasting the SAM beyond this is near impossible so you'll have to keep an eye on the local Forecaster Notes over the coming months.

It's funny I was talking to an old toothless bloke on the Point yesterday and apropos of nothing he said it was the worst year in 40 years.
thats the common refrain I hear.

Still no sand moved in favourable position by these last S pulses and ECL, it's just that swells have been strong enough to break on the depth contour.

Yeah we mentioned this in the last article, that select locations have been great, but on the whole it's been a very below average autumn.

Just on a lucky run I think Craig. I keep being in the right place at the right time ........... went for a bit of a wander today and scored a really good 4ft plus beach break with two others. The rest of the crew arrived as I came in. Back to the NB this weekend ......... not sure I will take my board!

Yeah I've been lucky and scoring through the autumn, but out of Sydney, otherwise it's been one to forget.

Rain..... poor rain the last couple of year’s effects the east coast. I’m on the central coast and there’s a few lagoons across the stretch that need filling and released.... The channel at the entrance for example is basically closed and the banks are non existent

However! I know for sure it's 10km either way to next puddle.
Let's just say GCCC freak peak ups the game for locals.(Secret is out!)

"You come into this world a kook, and you go out a kook. Just gotta hope you did okay in the middle.”

As a wedge of Himalayan proportions, Nazare breaks like no other big wave on Earth. Here's why it does what it does.

Will Webber on shaping for the CT

The Woz’s 'At Large: Jaws 2020' is a real showcase of creative firepower, but not in a good way.

Watch: Noosa in the raw

It's grey and it's raw, but it's also solid and makeable - shoulder-hoppers notwithstanding.

Swellnet for Lifeline Classic and Board Swap 2020

The Lifeline Classic is back in 2020 along with the Board Swap event, coming late March at Freshwater.

The Portuguese surfer was pulled unconscious from the water after making contact with his ski.

Twelve bar blues and too many barrels.

From Port Hedland to Portugal with Mick Corbett

Mick Corbett was cyclone dodging in the Pilbara when Nazare got the green light. Swellnet catches the Team Australia tow surfer in transit.

Ten teams of two surfers from all...actually only some, surfing countries will whip into big, clean Nazare.