Rip Curl Pro to end with a bang

"Good things come to those who wait," said someone, somewhere. And while the organisers of the Rip Curl Pro have had little choice but to call lay days, they'll now get their good thing. The event is forecast to end with a bang.

Tomorrow will be another lay day with no new swell due until the afternoon by which time the wind will be onshore, but the last three days of the waiting period are looking very juicy.

A progression of back to back frontal systems moving in from under Western Australia and towards Victoria this week will produce building levels of west-southwest groundswell, culminating in a very significant south-west groundswell event Friday afternoon and Saturday morning - the last day of the waiting period.

The first two systems will project westerly gales through the Surf Coast's swell window, generating building levels of west-southwest groundswell through Thursday, from 3ft in the morning to a better 4ft through the afternoon. Conditions will be excellent all day with a persistent offshore west-northwest wind.

The third and last frontal system is forecast to deepen significantly while tracking towards Victoria, on top of the active sea state generated by the two storms before it. A low pressure centre will form and broaden, with a great fetch of storm-force winds expected to project through Victoria's western and then south-western swell windows. 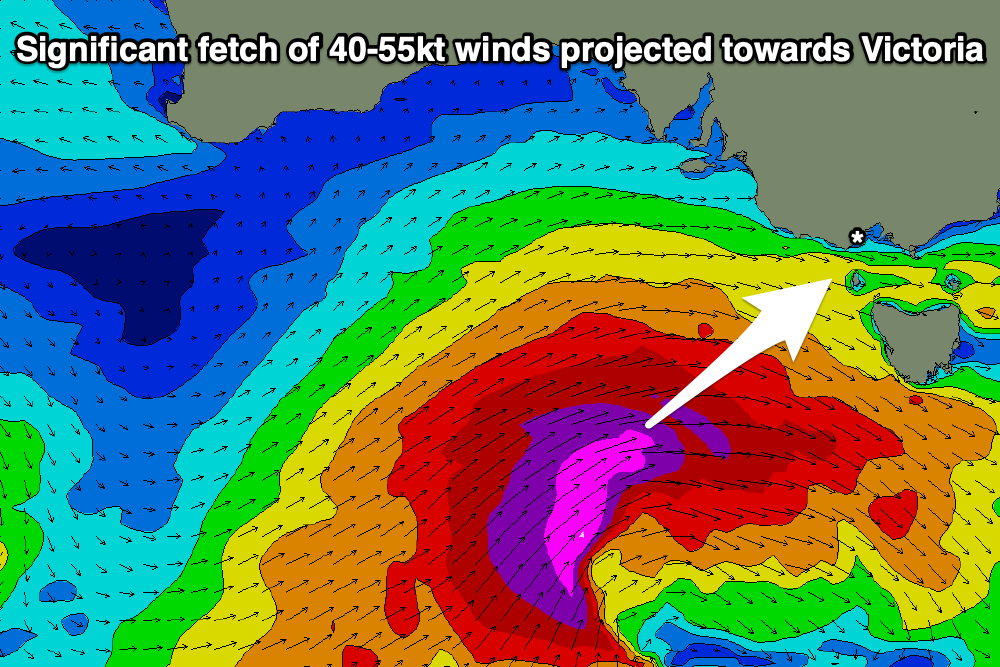 The swell should build steadily Friday from 3-5ft in the morning to 8ft on the sets by later in the day at Bells and Winki, though conditions will be very tricky with strong westerly tending west-southwest winds.

Saturday looks excellent though with a slow drop in size from 6-8ft and favourable winds for the reefs most of the day. You can catch all the action live on our Rip Curl Pro event page.

Sweet! Less air reverses and more old school power craving hopefully, the Occy v Curren heat will now be one to watch for sure.

Tip John John to be there at the end. Can only imagine his swoops ala
Margaret river at 8 foot Bells

I am the bone

Hope bohdi makes it to the finals in time ! " fifty year storm ".

see it a bit different , swell looks way more south now , so 10' + on Friday , but winds look to be SW and strong, but Comp will go as they have to finish Friday...

Why do they have to finish Friday? Saturday is the final day and the cleanest and best with size.

they are trying to finish by 2.00pm Saturday , they still have 47 heats to go , so at least 2 1/2 days of comp......Weds arvo swell starts to come up but winds go onshore , so they will need 3 days as I think they will have to extend heat times on Friday....winds Friday?

Yeah agree, just that in the post before you said they have to finish by Friday.

Winds Friday early W-W/SW but fresh to strong, swinging more W/SW to SW through the day though not overly strong (20kt or so).

shit ,sorry I meant Saturday , as there is 47 hrs of comp to run , fuck we just had 3 days of comp and eliminated 4 men and 2 women........its going to be interesting to see heats all day Friday , strong SW winds with I think a 10' plus swell ( We will know more tomorrow?) , guys are scrambling for bigger boards , most just brought 6'2-3" stepups .....guys are actually getting quivers flown in!

how can you be on the world tour and not have a minigun step up board in your travel bag.... i dont understand.

Maybe they'll do a Cloudbreak and call it off because it's too big and the pros don't have the right boards?

As we speak , boards are being shipped in from hawaii and SoCal , can't call it off as they must end on Sat.....winds look a bit better today , seems to me Friday looking like some very big waves especially in the afternoon , will they go to Winki as the wind will be a bit better.....but very hard for the Skis..or Bells boomers.....that is the question....??

I was only being facetious Sharkman.

Aren't there enough step-ups or licencees to make Lost/CI's in Aus?

If they can't find a suitable step-up in Torquay we have a serious problem....in other news it still looks like a lake out there

jeez it would want to be a fast ship

Thursday will be overlapping heat-o-rama

Overlapping heats make it so much more enjoyable to watch - that’s one change I’d like ten to keep and see run right through the year.

It will be interesting to see how they'll run it with 2 full days for the men and 1 full day for the women still to be run.

No disrespect to the women but I think most would prefer to see the men at bells when it is solid and chunky as they can get the most out of those conditions.

With a massive high tide around 4pm I'd say very slim.

On behalf of all the readers who never comment, thanks for this forecast and breakdown commentary. Bring it on! Also-freeride (I think it was you back in the Wilko rollerblading days) I miss your Aussie tour-stop write ups.

Anyway this could get interesting and i hope some of the women get arun in the big stuff....equal pay....equal opportunity.

i can't recall but in what vid was the quote- "if you wanna dance, you gotta pay the band."?

Without a doubt the heat of the contest could be curren vs occy.
No skim boards for curren in the forecast.

Pros flying in step up boards from Hawaii/USA...

Yeah gotta agree with the hypocrisy there ? Boards etc made from oil products then fly them over from the US ??
Carbon footprint bigger than Bigfoot himself !!!

@Pro's pack a range of board sizes (before leaving for the contest) like the old days.

@ goofyfoot,
Load up on dates and wear shorts.

Well the planes are coming anyway, they're just throwing a board or two on there.

Can’t argue with that!

Just hope the judges reward wave size on Friday. A few years back we had similar conditions and the pros let all the sets go and then took smoother smaller waves as the surface was settling down.
If the blokes are going to do that again, send out the women to surf proper big bells.

"angry online, smiley in the brine"

I have a feeling prit will punish any three stage bottom turns.
It should be interesting.

Im sure it is all in the mix. Why go a big, bumpy burger just to go the ‘biggest’ one over quality?

@zenagain it was Billabongs vid...... Surf Into Summer 87'
Up there with the best surf music put to a surf vid...... TSOL for example.
Jason Buttonshaw at Kirra on a 6 week week swell fest
New rule - three boards per event. Prep and forecast analysis would improve dramatically!

So Surfline are now calling Friday the biggest surf for the contest in 20 years and 18-20ft faces...

Bloody seppos. Mainstream media onto it too: https://www.theage.com.au/national/victoria/freak-waves-up-to-10-metres-...

Looking forward to it. And get your picks in for Bali . Great Swellnet Pro subscription and Surfrider subscriptions up for grabs... www.fantasysurfsessions.com

The wind is going to kill it. I can't see it being an 81. That year was glass from what I have seen, read and heard. Many spots on the coasts from Bridgewater to the Prom will fire up.

Anyone see it on dark? Looks like it's gonna come up fast....

Some 5ft sets at Bells. Tide wasn’t helping but felt like there was some energy about.

"You come into this world a kook, and you go out a kook. Just gotta hope you did okay in the middle.”

As a wedge of Himalayan proportions, Nazare breaks like no other big wave on Earth. Here's why it does what it does.

Will Webber on shaping for the CT

The Woz’s 'At Large: Jaws 2020' is a real showcase of creative firepower, but not in a good way.

Watch: Noosa in the raw

It's grey and it's raw, but it's also solid and makeable - shoulder-hoppers notwithstanding.

Swellnet for Lifeline Classic and Board Swap 2020

The Lifeline Classic is back in 2020 along with the Board Swap event, coming late March at Freshwater.

The Portuguese surfer was pulled unconscious from the water after making contact with his ski.

Twelve bar blues and too many barrels.

From Port Hedland to Portugal with Mick Corbett

Mick Corbett was cyclone dodging in the Pilbara when Nazare got the green light. Swellnet catches the Team Australia tow surfer in transit.

Ten teams of two surfers from all...actually only some, surfing countries will whip into big, clean Nazare.